Maurice Allais was born 31st May 1911 in Paris into an unpretentious world of small shopkeepers. His parents owned a modest dairy at 83, rue Didot, in Paris’s 14th arrondissement.

His father died of typhus in a prisoner of war camp in Germany during the first world war, when Maurice was just four. Throughout his life he was to remain deeply marked by this bereavement which no doubt explains to a considerable extent his commitment to European construction. He was prompt to remind others that he was a ward of the Nation.

His mother successively owned several different shops. Her 1923 remarriage eventually ended in divorce in 1938. The young Maurice spent part of the time living with his mother, part with his maternal grand-parents in Bourg-la-Reine and part with an aunt in the provinces.

A brilliant student graduating as valedictorian from the École Polytechnique

Against this difficult family background we find him at the local state school in the rue d’Alésia in 1919, some three years behind his age group. The headmistress of this establishment won his undying gratitude by allowing him to skip some classes and thereby catch up. In October 1921 he began his secondary studies at the Lycée Lakanal in Sceaux where his brilliant results led him to sit the first part of the Latin with Science Baccalaureate in 1928, followed the next year by a double Baccalaureate in mathematics and philosophy. He was consistently first in his class both in the humanities and in the sciences.

A history enthusiast at high school, he contemplated studying at the specialist École des Chartes, but his mathematics master dissuaded him, encouraging him rather to prepare for entrance to the prestigious École Polytechnique science and engineering school. A single year’s preparation, still at the Lakanal high school, sufficed for him to pass the competitive entrance examination to the Polytechnique, but dissatisfied with the prospects to which his place in the ranking entitled him, he decided to decline his acceptance and re-sit the entrance exam the following year after another year’s special mathematics class, this time at the Louis-le-Grand high school in Paris – a year during which he slept every night on a camp bed in the baby clothes boutique then run by his mother at 17, avenue Jean-Jaurès, in the 19th arrondissement.

He was among the highest placed upon entry to the École Polytechnique in 1931 and graduated first in his year in 1933. Polytechnicians being contracted to enter a branch of the civil service upon graduation, he opted for the Corps des Mines, not on account of any special vocation but simply because it was (and remains) traditional for the first-placed graduates of each new batch of Polytechnicians to do so because of the career prospects to which it opens the door.

He then carried out his military service, first at the Fontainebleau Artillery School and afterwards in the Armée des Alpes before two years of post-graduate studies at the Paris École Nationale Supérieure des Mines.

Maurice Allais embarked on professional life in October 1936 and after a brief stint at the Public Works Ministry contributing to an economic enquiry into the coal market he was posted to Nantes in April 1937 as a senior civil service engineer with the mines and quarries service. His responsibility extended to five departments and also included the inspection of railways and trams.

The year 1939 saw him mobilised in the Armée des Alpes where he was given command of an artillery battery on the Italian frontier in the region of Briançon. But for Lieutenant Allais the real war was to last only two weeks, from 10th to 24th June 1940.

Returning to Nantes, he stayed there until his appointment in October 1943 as Director of the Paris Bureau of Mining Documentation and Statistics – a post which he held until April 1948. Upon arrival in the region of Paris he settled at Saint-Cloud which was to remain his home until his death.

At Nantes his work in the civil service, already somewhat lightened by the circumstances of the war, did not suffice to satisfy his intellectual aspirations. He had been profoundly impressed by a journey undertaken for study purposes during his years as a Polytechnic student to the crisis-stricken United States, and more particularly by the “intellectually shocking and socially dramatic quality of the Great Depression,” and with a view to seeking the appropriate remedies he set himself to study economics, entirely self-taught, in particular by reading, alone, the works of those he was later to hail as his masters: Léon Walras, Irving Fisher, and above all Vilfredo Pareto.

Beginning in 1941, in tandem with his professional work, he embarked on the task of writing the two ground-breaking works which were, much later, to earn him the Nobel Prize in Economics: “À la recherche d’une discipline économique – Traité d’économie pure” [In Search of an Economic Discipline – Treatise on Pure Economics] first published in 1943, in the middle of the world war, and “Economie et Intérêt” [Economy and Interest], which appeared in 1947.

A career chiefly devoted to higher education and research in Economics

After the war he was prompt to specialize in teaching and research, which were to be the twin pillars of his career. Hence in 1944 he became Professor of Economic Analysis at Paris’s École Nationale Supérieure des Mines, where he continued to teach until 1988, and from October 1946 director of research at the Centre National de la Recherche Scientifique, CNRS (until his retirement from the civil service in 1980) at the head of the Centre for Economic Analysis (which was affiliated both to the École des Mines and to the CNRS). 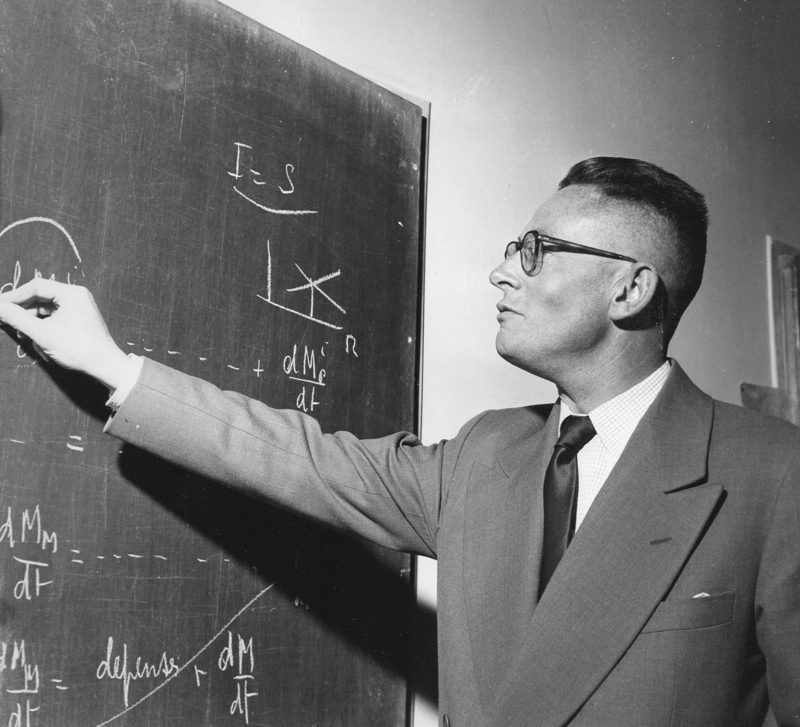 From April 1948 he definitively gave up administrative work in order to devote himself exclusively to teaching and research. In 1949 he was awarded his engineering doctorate by the Science Faculty of the University of Paris.

He also ran the Groupe de Recherches Economiques et Sociales (GRECS) which he founded in 1944 with Auguste Detoeuf, which organised talks at the Café Saint-Sulpice. From October 1953 until July 1970 this initiative continued in the form of the Economic and Social Research Seminars at Paris’s École Nationale Supérieure des Mines.

From November 1947 until April 1968 he also taught at the University of Paris’s Institute of Statistics.

Alongside his teaching and research work he played an active part as national or international delegate to various conferences aimed at European construction. From 1959 to 1962 he was also founder and general delegate of the Movement for a Free Society, a parapolitical organization of a liberal tendency (in the European sense). He also took part in the debate concerning the future of Algeria, in particular by his 1962 publication entitled “L’Algérie d’Evian” [The Algeria of Évian].

During the 1958-9 academic year Maurice Allais taught in the United States as “Distinguished visiting scholar” at the University of Virginia’s Thomas Jefferson Center. In 1970 the same University invited him to emigrate to the United States on terms that were financially very attractive, but after careful reflection he eventually decided to remain in France.

In 1959 Allais applied for the Chair of Economics at the École Polytechnique, but his bid was unsuccessful. The decision hurt him deeply as he felt it as an injustice on the part of an institution which in his youth had brought him both entire success in his studies and a prodigious rise in social standing.

On 6 September 1960, in his fiftieth year, the confirmed bachelor married Jacqueline Bouteloup, who had been his student and, since 1952, his faithful collaborator. After their wedding she never ceased to participate in all his projects, lending him essential support, until her sudden death in 2003.

After teaching for some years at the Graduate Institute of International Studies in Geneva (October 1967–July 1970) he was appointed in 1970 to the post of director of the Clément Juglar Centre for monetary analysis at the University of Paris X Nanterre, which he held until May 1985, teaching in partnership with his wife.

In 1978 he was awarded the Gold Medal of the CNRS.

In 1980, having reached the age limit for the Corps des Mines, he had to step down from his position in the civil service, but he continued tirelessly to pursue his teaching and research work.

In 1988 he was awarded the Nobel Memorial Prize in Economics.

In the wake of this ultimate recognition, homage, awards and honours poured in, from France and abroad, and he was often requested to lecture, write articles or be interviewed. In 1990 he was admitted to membership of France’s Académie des Sciences Morales et Politiques (Academy of Moral and Political Sciences).

He continued to write books and articles almost until his death, in his hundredth year, on 9th October 2010.

Although Maurice Allais is best known as an economist, whose immense body of writings has been recognized by the Gold Medal of the CNRS (1978) and the Nobel Prize in Economics (1988), he was also deeply interested in physics and history, which he studied by way of diversion and to which he devoted a great deal of time. 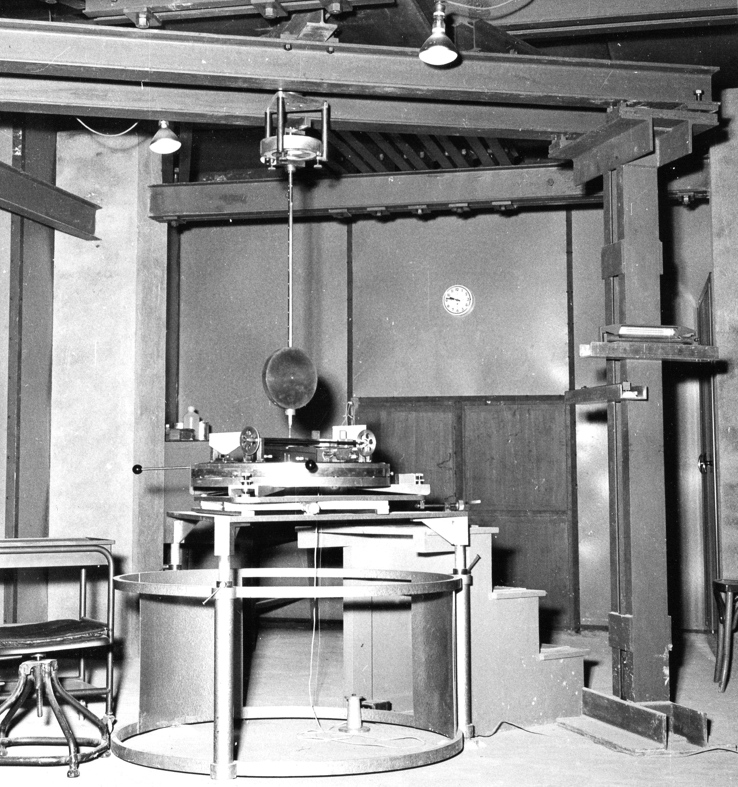 Physics was a real passion for him, from his studies at the École Polytechnique onwards and he would undoubtedly have devoted his career to it if the CNRS had been in existence when he began his professional life in 1936. From 1953 to 1960 he conducted experiments on the paraconic pendulum, initially in a small private laboratory (1953-1954) and subsequently in a laboratory of the Institut de Recherche de l’Industrie Sidérurgique (IRSID) at Saint-Germain as well as in an underground quarry at Bougival, bringing to light anomalies that cannot be explained in terms of currently accepted theories.

This research was recognized by scientific awards, both French and American. Later on NASA became interested, recognizing the existence of an “Allais Effect” during eclipses. Maurice Allais also published theoretical research studies in physics, first in the fifties and again in his later years.

Meanwhile his interest in history remained unabated since high school. Indeed at various stages of his life he worked hard on writing a general study on the “Rise and Fall of Civilizations”. Unfinished at his death it has never been published.